In one of the most unique and controversial plots I've ever seen, you play an undercover agent who disguises herself as a futuristic geisha to steal secrets from seedy characters. Puzzles are as weird as you can get, with many arcade sequences that are obvious metaphors of carnal acts. The game is extremely difficult due to the fact that it is not always obvious which item you can pick up, and the puzzles require very warped mind that most gamers don't have. Worse, you can get irrevocably stuck if you forget to pick up or use certain items in previous scenes, making it a tiresome save-and-restore affair. Nevertheless, the game's high originality and wacky plot might interest some gamers, especially those who like mature-themed games (although the erotic scenes are pretty mild). 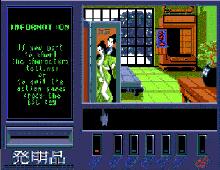 People who downloaded this game have also downloaded:
Lost Files of Sherlock Holmes 1 (a.k.a. Case of the Serrated, Darkseed 2, Heart of China, Maniac Mansion Deluxe, Cadaver