Framed is a charming side-scrolling action/adventure game that successfully combines arcade and puzzle-solving elements into a satisfying experience (although it was Alone in the Dark series that popularized the action/adventure genre).

In this game, you start out as a prisoner who, as the title suggests, has been framed and must break out of prison to prove your innocence by catching the real culprit. The designers masterfully weaves arcade and adventure elements: as in most platform games, you have a "health bar" which goes down as you are shot at or hit by the guards. You can pick up various weapons to defend yourself, as well as "power-ups" to regain health. However, brute force isn't all that is needed to succeed: you must also solve various puzzles by collecting and using items, which sometimes must be combined. All the puzzles are logical, and some are even creative. Although they won't be a challenge to expert adventurers, they are far from obvious. Excellent built-in hints should appeal to adventure novices as well. There are a few things that could be better, such as some extreme pixel-hunting (items are hard to separate from the background) and unattractive graphics, but none of them cripples the game. 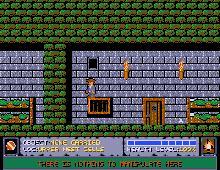 People who downloaded this game have also downloaded:
In The Dead of Night, Lost Files of Sherlock Holmes 1 (a.k.a. Case of the Serrated, Jack The Ripper, Flight of the Amazon Queen, Frederick Pohl's Gateway