Fallacy of Dawn is the latest title from Robb Sherwin, designer of A Crimson Spring, my most favorite old game of the 6th Annual Interactive Fiction Competition, and is undoubtedly his best yet. Like his previous games, Fallacy of Dawn is a very immersive game set in New Haz, a fictional town in an alternate near future that looks and feels remarkably like a seedy part of New York City. You are Delarion Yar, a down-on-his-luck hacker who made a living out of breaking copyright protection schemes and pirating software?until you get caught by the powers-that-be who ordered your ability to perceive electromagnetic spectrum removed (surgically maybe). Left to your own devices in New Haz, a town famous for scumbags of all kinds, your only hope is to get enough money to get out of town. But to do that, you need to hack computers, and that requires being able to watch TVs and computer screens. Which means you need to fix your nervous system, which means you need money. Quite a Catch-22 situation, and with a failing short-term memory, an increasing reliance on a drug called ?Ree,? and a few local thugs claiming you owe them thousands of dollars, you?re off to a good start indeed...

The game starts out in Benji?s Arcade, a local arcade store where you are employed as a clerk. After a tense but easy early timed puzzle, you will soon discover two trusty friends, and the world of New Haz will slowly draw you in. Make no mistake about it: despite the early puzzle, Fallacy of Dawn is a story-driven game, and a hell of a good one. Thanks to Robb's sharp, punchy writing, the game is very atmospheric, and the dialogues are the best part. You will talk to dozens of characters, all of whom very interesting and always seem to have either tales to tell, or bones to pick with you. The map of New Haz that?s included with the game is essential for finding your baring, and there is no shortage of interesting places to explore and people to meet. Fallacy of Dawn is essentially a great story peppered with a few puzzles here and there, and all the puzzles are fair and logical. Although it is a text-based game, the stylish, watercolor-touched graphics (similar to CD-ROM game Golden Gate) are appropriately moody and add tremendously to the gritty feel.

Although the game is already enjoyable in its own right, what makes Fallacy of Dawn a must-have is the amazing number of references to classic games. Simply put, Fallacy of Dawn is in my opinion the best tribute game to the golden days of gaming ever made. Almost every popular (and even not-so-popular) title from the heyday of arcade machines (late 1970s) to the 3D craze of the 21st century is referenced, revered, or critiqued in the game. If you are a die-hard gamer who fondly remember Mr. Do! coin-up machine and watch with amusement when a turkey like World War II Online was released with a huge fanfare (yes, Robb thinks it?s crap, too), you will have tremendous fun with Fallacy of Dawn. I spent a lot of time just picking up random games in a bargain bin in the game, just to see what Robb has to say about them. Never mind that there are some annoyances ? such as typos and some obvious objects in room descriptions you can?t interact with?those are very minor compared to the wonderful atmosphere in the game.

In Fallacy of Dawn, Robb?s knack at sucking you into his world is better than ever, and when you discover that he is a kindred spirit when it comes to respect for classic games, you know you are in for a real treat. I can?t imagine any visitor of this site (except those who mistake it for some cheesy "warez" site ;)) not liking this wonderful old game. A must-have, without a doubt. 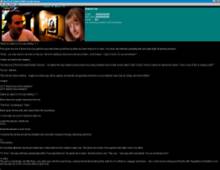 People who downloaded this game have also downloaded:
Chronomaster, Darkseed 2, Darkseed, Sanitarium, Legend of Kyrandia, The: Hand of Fate