Paul O'Brian said it best in his review: "[Exhibition's] story takes place at an art exhibition, the final show of a painter named Anatoly Domokov, who committed suicide shortly before the show opened. The only thing to do is stand around and look at the show's twelve paintings.. The player may view the paintings from one of four viewpoints. Unexpectedly enough, this collection of descriptions is a puzzle. It is up to the player to... put the pieces together so that one viewer's comments clarify those of another, and both together sharpen the focus on Anatoly's silhouette. As an exercise in character and viewpoint, Exhibition is an impressive performance. As storytelling, it is mesmerizing. Exhibition may be a game of absences, but like the stories it tells, it wields a power far greater than the sum of its parts." A must have! 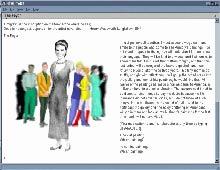 People who downloaded this game have also downloaded:
Fallacy of Dawn, Callahan's Crosstime Saloon, Flight of the Amazon Queen, Lost Files of Sherlock Holmes 1 (a.k.a. Case of the Serrated, Darkseed 2