Essex is the second, and probably worst, game in Synapse's promising but short-lived "interactive novel" series. The game follows the real-time format of Mindwheel, but with a much-improved parser. The premise is simple: your pleasant sightseeing tour of the Starship Essex takes an unexpected turn when a dying agent implores you to find a scientist on board-- a scientist who has the only formula that will help the Federation defeat the alien Vollchons.

As with other Synapse games, many puzzles require astute timing and must be solved within time limit. Essex, however, degenerates into a very frustrating game of hide-and-seek, as you attempt to find various characters in the labyrinthian ship. Your mapping skills will be stretched to the limit in this game, and worse yet, characters move around freely in a seemingly random pattern. Although you can use the Intercom to locate them (by asking "WHERE ARE YOU?"), they might not be at the location they told you once you arrive! Worse still, some puzzles require some characters to be with you, so finding them is imparative to finishing the game.

This frustration aside, Essex is a well-written and enjoyable sci-fi game, although it's not up to the standard of other Synapse games. The game will prove a worthy challenge to IF veterans, but definitely is not for the easily frustrated or IF newbies.

Irritating science-fiction game. Solve puzzles and find men on a starship. The irritating thing is that the people on the ship are walking free around... It's very life-like, but can be frustrating. 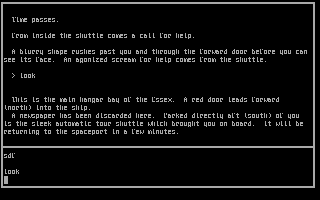