The second effort from amateur developer Femo Duo Entertainment, Enclosure is a very fun murder mystery game with a lot of sci-fi trappings. You play Mike Goodman, a small-time con artist who was hired to investigate paranormal activities at a deserted science station called 'Mary' - along with a team of real professionals. Of course, things start to go wrong almost as soon as you arrive. As dead bodies pile up, the plot thickens, and it's up to you to unravel a decade-long mystery once and for all.

The game is similar to 5 Days a Stranger, another excellent freeware game, in the gameplay mechanics, pace, and focus on characters and plot. You spend most of your time wandering inside and around the station, talking to others on the team, collecting anything that is not nailed down, and generally doing things that trigger important events in the plot. Similar to 5 Days a Stranger, each NPC has his or her own schedule and agenda to follow, and the passage of time is used effectively to maintain interest and create suspense. Solid writing, especially during dialogues, helps make you feel really involved in the story. You learn more about the various characters every 'day' in the game, and will come to hate, sympathize, or pity them by the time it ends.

Puzzles are relatively few and easy, although some of them suffer from the "pixel hunt" syndrome that plagues most graphical text adventures. One of the most infuriating problems stemming from this is that the game sometimes gives you the standard "you don't see that here" response if you are not standing at the right spot to "see" the object and pick it up. This caused me a lot of headache while trying to pick up the box of matches and a crowbar. The parser, as with most AGI (Sierra's engine behind Police Quest and a few others), is quite poor and nitpicky. Fortunately, easy puzzles help minimize the problem as it is rarely hard to know what you need to do.

Like early Sierra games, there is a couple of arcade sequences in the game, neither of which is difficult - although the option to "opt out" (as in Dynamix's adventure games or Pleurghburg to name a recent comparable) would have been nice. All in all, Enclosure is a fun fanmade game that is good enough to keep you entertained through the end. It does not quite match the suspense of 5 Days a Stranger, but as a horror/mystery game with some sci-fi trappings, it can hold its own as a very well-designed game. Recommended! 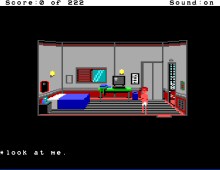 People who downloaded this game have also downloaded:
Deadline, Flight of the Amazon Queen, Cruise for a Corpse, Earthrise, Darkseed 2