If you are familiar with any of the games from Sierra's popular adventure Space Quest series you will see several similarities from those games to Earthrise. Mainly the game story as it takes place in the space and you control a single character in the game that has to solve different puzzles in order to complete the game.

The story in the game is a true classic. You are asked to go to a space station where you end up with finding the crew dead and then discover some creatures that you of course didn't expect to see. It is then up to you to stay alive and solve all the things. The original Space Quest series was especially well known for the humor included and this is where Earthrise can't offer much since Earthrise hasn't been given the same attention at all.

The actual game interface, controls and general gameplay is almost like playing Space Quest though and while some people might just think that Earthrise is a cheap copy of Space Quest I can say that if you are a true fan of both the adventure genre and a Sierra fan in general you will also be able to enjoy Earthrise simply it will look so familiar for you. A game that is a bit over average but nothing more than that.

Earthrise is a typical Adventure of the Science-Fiction-Genre. The story is wellknown: The last crewmember of a Space-Station in panic transmits calls for help. The player flies to that station, professionally looks over the dead bodies of the crew and sees mutated animals near the reactor - any further questions?

This game really looks like the early Space Quests and it surely is of equal quality, though maybe not as humorous, but you may judge that for yourself. It is a challenging game, not easy - the controls are a real mess on faster computers. Try moving the your astronaut to an exact position and you know what I mean. Well, I tried typing in where I want it to go, but it simply repeated "Do that yourself!" - ok, that's settled... Anyway, apart from that we've really got one of the best games of this genre here. Be sure to save often, rumors say that this game comes close to having the most different ways of dying. I didn't count, but it's pretty easy to die and you should be prepared. So tell your mouse to go on holiday and get back to the real gaming-experience of the old days - here comes Earthrise!

In Matt Gruson's first adventure game, you play an astronaut / scientist who is rudely awaken from cryo sleep by the ship's alarm. Explore a deserted space station overtaken by weird aliens and avert an asteroid's crash collision with the earth. Overall, a great adventure game reminiscent of Sierra's AGI classics (Police Quest 1, etc.) The game is fairly long and has a tough time constaint (the station will blow up if left alone), but the puzzles are logical and fun.

It's a Space Quest Clone. Save the earth of becoming destroyed by some very big asteroid! Or at least that's what you thing. Exploring this game will tell you more.... 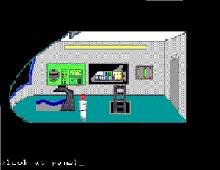 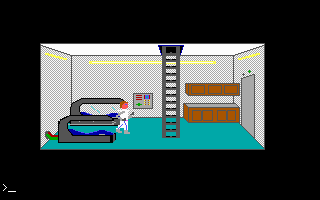 People who downloaded this game have also downloaded:
Enclosure, Demon's Tomb: The Awakening, Bureaucracy, Flight of the Amazon Queen, Enchanter