A huge and well-written adventure that's arguably Mastertronic's best adventure game, Demon's Tomb recalls Infocom's Infidel in that you play an archeologist who must save his findings for posterity. In the second half, though, you will play his son whose task is to find out what happens to his father's doomed expedition. Flexible parser and good graphics makes this an excellent game, and some puzzles are quite tough.

The more items you have Lynton preserve in the prologue, the more you'll be able to accomplish when you play Richard, although achieving complete victory eventually requires you to save everything. This is an original and interesting method of maintaining non-linearity in the game's puzzle structure, as the player can save a few items, then restore and try others to explore different possibilities in the game. Saving all of Lynton's research is the major challenge of the game, requiring flawless execution and perfect timing, but if you don't quite get it right, you're still able to do some serious exploration with what you do manage to save. The downside to this is that it's all too easy for a player to use the information obtained from Lynton's death to do better the next time. Worse still, some of the puzzles you solve as Richard exist only to provide you with information. Since there are no random elements in the game, the player has the option of completely bypassing these puzzles the next time through, thus eliminating a large portion of the game altogether. Also lost is the threat of the time limit -- the player is given only a few hours of game time to complete the quest. But by skipping puzzles, hours of time are saved, and any possibility of tension is gone. Some of the puzzles are generic, but a few, particularly the prologue, are quite good. There are a couple of minor red herrings that serve only to waste players' time, but nothing you'll spend hours trying vainly to use. The game's parser is adequate, not as advanced as Infocom's, but it allows you to accomplish what you need to without playing guess-the-verb, as well as letting you do some fun stuff (Sam accounts for a large portion of the game's humor). A menu-driven parser is available for non-typists that allows you to select verbs, objects, and prepositions with just a few keystrokes. The game also offers built-in hints in the form of a "THINK ABOUT" command that lets you see what Lynton or Richard makes of a particular item or place. This system does an admirable job of steering players in the right direction without giving away the entire solution.

Despite its shortcomings, Demon's Tomb is a fun game that will take you a good many hours to complete. It doesn't overwhelm beginners, and makes an effort to challenge more experienced players as well. Recommended! 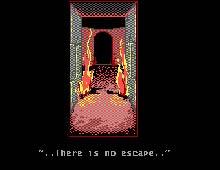 People who downloaded this game have also downloaded:
Bureaucracy, Arthur: The Quest for Excalibur, Complete Kroz Series, The (a.k.a. Kingdom of Kroz), Sanitarium, Earthrise