Complete Kroz Series, The (a.k.a. Kingdom of Kroz)

First published by Softdisk in 1987, Kingdom of Kroz is the game that launched Scott Miller's career as famous founder of shareware giant Apogee. The game's claim to fame is well chronicled in Apogee FAQ: "In 1988, Kingdom of Kroz I received top honors in the game category of Softdisk's CodeQuest '87, a national programming contest, and came in second overall (it lost to a spreadsheet program). Scott Miller himself said, in the notes to a later version of the game, "Thanks to Kroz, I now know what a mutual fund is, but on the downside my taxes require a book two inches thick to figure out." In short, Kroz marked Apogee's birth, emergence into the national mainstream, and coronation as one of the earliest kings of shareware."

It is nothing short of amazing that Miller manages to code a charming action/adventure/puzzle hybrid with only standard 255 ASCII characters. Kingdom of Kroz and subsequent games in the series contain dozens of levels, all of which are very cleverly designed. There are many mysterious objects to find and use. Among the game's most memorable features are the two side-scrolling levels, in which you move horizontally across the screen. With clever level design, cool sound effects, and many devious puzzles and objects, the Kroz series provides a thoroughly entertaining and unique adventure. In many ways, it is a true precursor of ZZT, a much more expansive ASCII adventure from Epic Megagames that boasts a level editor but inferior gameplay. A must have! 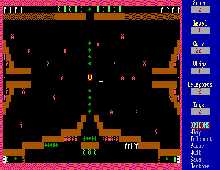 Complete Kroz Series, The (a.k.a. Kingdom of Kroz) screenshot

People who downloaded this game have also downloaded:
Chronomaster, Bureaucracy, Apprentice, Clue!, The (a.k.a. Der Clou!), Beneath a Steel Sky