Emily Enough is a fun, professional-quality "black comedy" adventure game by Logan Worsley that offers a unique setting, an interesting plot (not for the easily disturbed) and cast of characters, good writing, and logical (but easy) puzzles. Adventure Europe elaborated very well in their review of the game:

"The Enough family has arranged a birthday party for little Emily in the Enough estate. Emily is a very demanding girl. When her parents fail to please her insane demands, Emily flips out, grabs a knife and stabs her whole family and their servants! Emily Enough became an instant phenomenon for the media and the journalists called her the kiddie killer. When asked why did she do it, Emily replied: 'I wanted to see what was inside mommy'. The court sentenced Emily to the Claxochem Center for mental wellness institute. This institute however is falling apart. The company that owns it had to go under several budget cuts, resulting in the layoffs of all the institute's personnel. To make things even worse Claxochem moved their offices in the institute!

Emily of course would rather be free so as the game starts you take control of her and your goal is to set her free. There are quite a few characters in the game, many of them are mentally disturbed individuals. All of them are quite interesting to talk to - well...at least those that do talk. Because there are a couple of them that don't. But even they have something special about them. The game's length is short, but not too short. It took me about 4 hours to finish the game, which is quite enough for a freeware adventure game. The end was satisfying and quite funny too. It is quite remarkable how Logan kept a balance between the dark matter of the game and the humor in it. All in all the story is very satisfactory and definitely a couple of notches better than your ordinary freeware adventure game.

Graphics: The graphics of the game although not state-of-the-art (not even for freeware adventure game standards) they do fit the story like a glove! Pale characters and moody-coloured backgrounds provide the player with a mixture that radiates melancholy and insanity at the same time. One thing that could have been improved would be the characters' animation. Most of them were quite stale throughout the game. Some variation on their movements would be a welcome addition to the game.

Gameplay: The interface is similar to the ones used in the Sierra point and click adventures. With the right mouse button you scroll around the possible actions you can perform, which are WALK, LOOK, USE, TALK and Inventory item. The dialogues interface is more similar to the Lucasarts one, where you have a number of choices on the bottom part of the screen that you can choose from. The challenges are quite logical most of the time, although there will be a couple of times where you won't be sure what you have to do next. However, the game world is not that huge so if you explore your surroundings you will be very likely to finish the game without referring to a walkthrough. 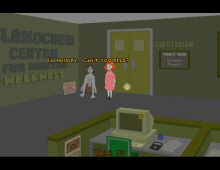