Yee-haw! Experience life in the wild, wild west in this adventure co-designed by jokesters Al Lowe and Josh Mandel. As the title suggests, you are a gunman-turned-pharmacist who will soon find enough cause to pick up a gun again. Excellent puzzles (except for the annoying, devious copy-protection scheme disguised as "puzzle" in filling prescriptions), cool plot, and tons of zany characters. The humor is somewhat stale and predictable, however. Suffice it to say that if you have never understood the appeal of John Wayne movies and raunchy cowboy humor, you won't enjoy this game. But for anyone who appreciates jokes that have the word "flatulant" in them, this is the perfect game for you.

Freddy Pharkas: Frontier Pharmacist is an adventure game that was published and developed by Sierra On-Line Inc. and was released in 1993. This game is a western spoof that is both humorous and fun to play. It has easy click and point features and it was nick named the blazing saddles of the gaming industry by Computer Game Magazine.

Your character is Freddy Pharkas, a not so lucky retired gunslinger. He had lost one of his ears in a gunfight and decided that he needs to find a much quieter profession. The town he lives in, Coarsegold, California, is in really bad shape. The town has been overrun by corruption and violence. The town's legitimate businesses are either being bought up by bad guys or losing employees and customers due to threats and senseless violence. You have to expose the bad guys, make friends and allies, and help him to become the hero that he was before he lost his ear to Kenny the Kid.

The characters in the game come from the typical stereotypes from the old west from cat house madams to Indians. Your sidekick (yes you have a sidekick) is kind of an Indian. His name is Srini and he is from India, so he is not the kind of Indian you were thinking he was. Freddy also has a love interest in the game who is called Penelope Primm (she is also the town's schoolmarm). Another person that tries to help him is Madame Ovaree (a play on a particular word is my guess) who owns and runs the local brothel. There is even a narrator named Whittlin' Willy who is also the town's eccentric old man (you know every town has a couple of those). You need to find out who is trying to take over the town and why and then get rid of them because the slimy old sheriff refuses to do it.

The music is also a very interesting part of the game. You can choose to play old country cowboy tear in my beer ballads or even a perverted version of the old classic chopsticks. It has a karaoke type bouncing ball option at the beginning of the game in the intro song. The graphics are decent and cartoon like with over exaggerations on the way they portray the characters. If you do play this game, make sure that you read the manual that comes with the game because it will help you a lot when it comes to solving the puzzles. The manual is called “The Modern Day Book of Health and Hygiene.” Some of the content in this book adds comedy to the game as some of the content is pretty funny. 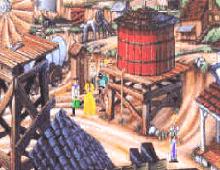