Adventures of Willy Beamish is the last adventure game designed by Dynamix' founder Jeff Tunnell, the prolific designer of such puzzle classics as The Incredible Machine. You are precocious youngster and resident console-game addict Willy Beamish, who, in his insatiable quest to procrastinate, starts out his summer vacation on a high note with a bunch of friends, gets into bigger and bigger trouble with bullie, and eventually gets to save his hometown from malignant adults who are poisoning the town's only river. The optional puzzles and multiple puzzle solutions that made Jeff's earlier classics Heart of China and Rise of The Dragon highly replayable are sadly missing from this game, as here Willy is plunged headlong into one trouble after another without any control over his fate, and the adventure is over all too soon. Still, funny animations, clever puzzles (some involving Willy's pet frog as an inventory item), and humorous antics help elevate the game above mediocrity. Beware of some timed sequences that might be impossible to pass without slowing down your computer.

The summer holidays have begun, but Willy Beamish has a big problem, his schoolresults for last year. The report is on the mail and Willy knows that if his father sees it, his opportunities for the Nintari championship are over. So Willy needs to get home before his father. That's where the game starts, you have to try and get Willy out of class, or even better, out of the school building. If you don't succeed, Willy's father sees the report. But sooner or later dad will find out about the report card and he gives the key of Willy's Nintari to his sister, so she'll keep it safe.

There are 2 problems now, the first: Get the key of Willy's Nintari back so he can practice for the championships. And the second problem: Get Willy enough money to be able to enter the championships, that means about $3,000.- if I'm right.

This is a very original game. It's very hard and for me, the game stops at a certain point, where the babysitter changes into a bat and I really don't know how to get further. Well, this game is really worth a try, the idea is very original and there are many different ways of playing and succeeding in this game. Check it out! 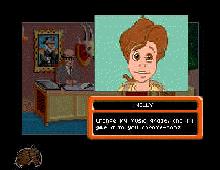