Cubert Badbone, P.I. is a fun freeware point-and-click adventure game that more than makes up for its short length with spot-on Noir-ish humor and style. The charming plot goes as follows: you play Cubert Badbone, the only private investigator on Ekrat Island, an island floating in space somewhat near Earth. Ekrat is a popular vacation spot for humans who visit from Earth, until one day they inexplicably start to disappear. This is bad for Ekrat's economy, as human tourists are a crucial source of income. It's up to you, then, to find out how and why the humans have disappeared from the island.

The game's most obvious strength is the eye-catching and uniquely appealing graphics, which looks like a cross between black & white Noir films and zany claymation of The Neverhood. It does take a while to get used to the ornate, flowery font, though. The game has plenty of funny dialogues with memorable NPCs, although the puzzles are straightforward and a bit on the easy side. Overall, if you enjoy short but entertaining adventure games that focuses more on presenting a good story and imaginative cast of characters than stumping you with tough puzzles, Cubert Badbone is well worth your time. I had fun for the 4-5 hours it took me to complete it (including some minor pixel-hunting headaches), and I'm looking forward to the hopefully longer sequel. Recommended! 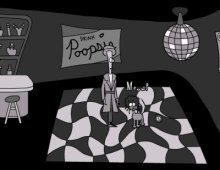 People who downloaded this game have also downloaded:
Cruise for a Corpse, Clue!, The (a.k.a. Der Clou!), Chronomaster, Apprentice II: The Knight's Move, Callahan's Crosstime Saloon