Apprentice II is a superb sequel to Apprentice, a fun point-and-click adventure game from Herculean Effort Productions reviewed elsewhere on this site. Like the first game, Apprentice II is coded with the increasingly popular Adventure Game Studio. The game is set in the same charming magic-filled world as the original, and the plot answers some of the more obscure dialogue entries from the first game. Lord Ironcrow, the ruler of a small town our hero lives in, has decided to draft the populace into his army in a preparation for war. You play Pib, the young magician's apprentice who has to accomplish three "tests" set by his master in order to become a full-fledged wizard and, hopefully, avoid the onerous draft.

2004 saw a marked improvement in the quality of freeware adventure games (No-Action Jackson and 7 Days a Skeptic come to mind), and Apprentice II proudly joins the ranks of commercial-quality releases. The graphics, like the first game, is top-notch, and its cartoony feel reminds me of Monkey Island games. The game is longer, more difficult, and more entertaining than the first. The three tests can be finished in any order, lending a good dose of non-linearity into the game. NPCs are colorful and equipped with a lot of funny quips and fascinating stories to tell. Puzzles, overall, are much better than the first game, although there are still a few bugs or two I noticed (crucial a-bit-spoilery advice: don't go into the camp until you have managed to put the highwaywoman's pen on her desk. Otherwise you might trigger one of the few unintentional dead-ends in this game. You'll thank me later ;))

With a good fantasy plot, a fun cast of characters, fun puzzles, and outstanding graphics, Apprentice II is definitely well worth your time. It took me about 3 hours or so to finish, making a decent "medium size" game that will take you longer than a coffee break to complete. 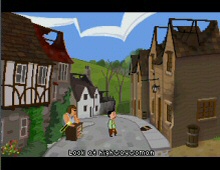