City of Lost Children, The

One of the worst games I have ever played, City of Lost Children is a completely uninspired and incrediblye bad computer adaptation of a cult classic movie of the same name. How bad is the game? Games Domain's comprehensive thrashing of this Real Dog says it all:

"The storyline behind The City of Lost Children is very intriguing to say the least. Based on the surreal movie of the same name, it deals with a mad scientist named Krank. Krank has been rapidly aging because he cannot dream. His henchmen, called the Cyclops, roam the streets at night kidnapping the city's children so that Krank can steal their dreams with a sinister device. With these stolen dreams Krank hopes to reverse or stop this rapid aging. Enter One, a circus strong man, whose little brother has recently disappeared, and Miette, a 12 year old orphan (or 10 depending on which information you go on. Miette seems to have aged two years between the back of the game box and the character profile contained inside the manual.). Miette befriends One and takes on the task of finding his brother and discovering what's been happening to the city's missing children.

Sounds promising right? Well, I hope you paid attention to the above paragraph because that's the most complete information you're going to get about the storyline. They seem to have forgotten to actually include it in the game itself. To make matters worse, there are several brief, but interesting, character profiles included in the games manual of characters that are also never fully explored within the game.

In the game you control the character of Miette as she wanders aimlessly through the city on a series of bland, typical get item "x" from person "b" to give to person "c" type quests. This takes up about the first three-quarters of the game. Only then, does the true plot (what little there is) of the game come into play. And this is done with a non-interactive cut-scene. Then you'll need to do a few more get "x" from "c" etc. type quests before... poof.... another non-interactive "movie" cut-scene resolves the plot and..... game over. Oh, yes along the way Miette does get to converse with several characters too. But the dialog between these characters and Miette is so brief and unrevealing that it's hardly worth mentioning. So let's move on to the games controls (or just run screaming into the night, your choice.).

The City of Lost Children is, in the end, just that.... a disappointment. The City of Lost Children is a game that is only nice to look at, lacking any real gameplay or plot. What little there is of the two is shallow and needlessly frustrating as you watch Miette, once again, do her little "shuffle step" to align herself "perfectly" to climb a flight of stairs or open a door. The characters that you'll interact with, who could have been fascinating, are all presented in a rather "flat" and dull manner. The tasks you need to complete are rather boring and very routine. And, to really make you wonder why you bothered at all, the story ending is taken out of your control and concludes as you sit there idly watching. Oh, and this game is very short on top of it all! I think it took me a grand total of about 4 hours to complete it (and no, I didn't use a walkthrough.). On the plus side, the game ran flawlessly and very smoothly in a DOS window in Windows 95 on my system and looked and sounded fabulous. If you can overlook the lack of storyline, sometimes clumsy interface and routine "go fetch" gameplay, you might enjoy strolling through this game just to enjoy the beautiful graphics. If however, like me, you actually want a game that is as enjoyable to play as it is to look at.... run, very fast, in the other direction and spend your gaming dollars elsewhere. This game is best left "lost"." You have been warned - play this Real Dog at your own risk. 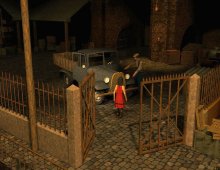 City of Lost Children, The screenshot