CIA is a below-average BASICA game distributed only among IPCO members. Due to limitations of the BASIC language and early 1980 hardware, the game amounts to little more than a quirky piece of PC nostalgia. From the MobyGames description: "CIA is a text based adventure game. You work for the CIA and are assigned to recover a valuable ruby. The ruby is being used in a top secret laser project, but it has been stolen by a spy ring called Chaos! It is believed the ruby is still somewhere in the neighborhood. For this assignment, you will be working with a partner (the computer). By entering two word commands, you can tell the computer what to do in order to explore your surroundings and find clues. Good luck, and don't let Chaos catch you!" 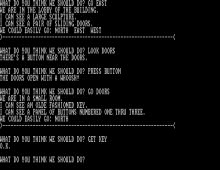