A nice little Roguelike game. Unlike most games of that type it doesn't go into the RPG direction, but more towards a classical text adventure. Calling the parser anything but poor would simply be wrong. However since the game does not primarily focus on the typing of commands it works very well. The story is simple - you're locked in a castle and have to find a way out while collecting as much treasure as possible. There are some puzzles to be solved to get what you want - like you got to find a cross and show it to the vampire that blocks your way. All in all it's pretty simple, but still a nice piece of nostalgic gaming every fan of this genre will enjoy.

One of the most memorable ASCII games of the bygone BSS era, Castle Adventure is a fun parser-based maze adventure designed by Kevin Bales, and later released ("stolen" in fact) by Keypunch as part of their Swords and Sorcery package.

Similar to Atari's Adventure and many other early adventure/RPGs, your objective in the game is to collect all valuables and complete all tasks. A perfect score is 1,550 points, but it is possible to finish the game with lower score. Although the game looks like a very out of date title, with ASCII characters and simplistic gameplay, Castle Adventure is actually both more memorable and deeper than most ASCII games. For starter, room descriptions are quite detailed and well-written. Second, the game is played in real time, which means monsters will not wait for you to type something before they attack. This makes fighting appropriately exciting. Lastly, the game is much deeper than most other maze games because it has puzzles. These require you to type the right commands into the parser, like in a typical text adventure, such as "show cross to vampire." Although most puzzles are obvious, there are some obscure ones that will stump you for some time. In a nod to RPG genre, you can only carry a limited number of items at any given time.

All in all, Castle Adventure is one of the best examples of what an all-text, freeware game coded way back in 1985 is capable of. If you miss the days of BBS, here is something that stands the test of time. Highly recommended!

Note: the download here includes both the original game, and the subsequent Keypunch re-release (with name changed to Golden Wombat) that was illegally included in Keypunch's Swords and Sorcery commercial release without the author's consent. 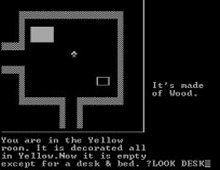