Calsoon is a short but sweet freeware adventure game from GASPOP Software. The story goes as follows: "Tork is a perfectly normal guy, well, almost normal at least. He loves to collect underwear. But one day, as he was about to actually put on some trousers for a change, Tork was sucked into the wardrobe and was teleported to a peculiar island which he'd never heard of before. Tork must now help the inhabitants of the island by defeating an evil witch so that he may return home to his precious underwear collection."

The game will only take you a few hours to complete, but you'll enjoy it while it lasts. Although Calsoon isn't as flat-out funny as, say, Ultimerr, it's got plenty of charm and fun puzzles to keep you entertained. Don't expect an epic by any means, but for a relax evening with traditional adventures, Calsoon fits the bill. Recommended. 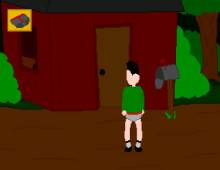