Calsoon 2 is a funnier, bigger, and better sequel to Calsoon, GASPOP's entertaining but very short fanmade point-and-click adventure. As in the first game, poor Tork (a man with an unconventional hobby of collecting underwear) is once again sucked into an alternate reality through his wardrobe (perhaps the same one that plagued Simon in Simon the Sorcerer) while checking out his underwear collection. Your job, of course, is to bring him home.

The game is much bigger than the original Calsoon, although it's not as big as GASPOP's masterpiece Pleurghburg: Dark Ages. The game uses a modified AGS interface that is very unobtrusive: you can choose to display the menu of action icons or hide it, or move it to the bottom of the screen. The graphics are better than average, but I find the font style quite ugly and some screens are far too dark. The snow effect is also pretty bad to look at, but fortunately you can turn it off.

The strength of Calsoon 2 lies in interesting puzzles and a good sense of humor, even if most of it is more sophomoric than, say, the Spellcasting series. Puzzles are logical and not very hard, although some require you to revisit old locations to find new items that mysteriously appear. Overall, Calsoon 2 is a fun freeware game that's well above average, even if it doesn't have the same caliber as Pleurghburg. Well worth a look if you enjoy point-and-click games. 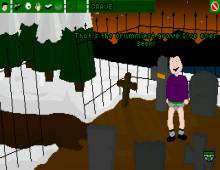