Don't let the dismal 1995 CD-ROM remake of this game fool you-- Captain Blood became an instant classic when it was first released for the Atari ST. Similar to many other sci-fi classics such as Elite and Starflight, this game is hard to pigeonhole: it weaves action, adventure, and strategy elements into a cohesive whole. In Exxos' typical how-did-they-think-of-this plot, your task is to find and destroy five 'Numbers' (i.e. clones of yourself) from which you will suck bodily fluid to survive. The hallmark of this game is the unique alien language and setting. The adventure portion is non-linear, as there are many randomly-generated planets to explore. The interface takes a while getting used to, so make sure you read *the manual* carefully. 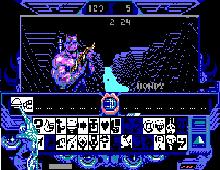