So here's the fifth part of the great Ultima-series. This time it's the Shadowlords the Avatar has got to face. Very TOUGH guys indeed. Hard to defeat. Lord British hasn't returned from a journey into the underworld of Britannia, Blackthorn, "a trusted but ambitious, subject", took over the ruling of Britannia. Needless to say, that one of your tasks is to rescue Lord British - the other is of course the destruction of the three Shadowlords. On his way the Avatar has to fulfill several quests and keep an eye on his Karma, which is bound to the eight virtues. And as if that wasn't enough, you don't have to expect any help from Blackthorn. Your friends Shamino, Iolo and some of your other old companions have already been called outlaws. And so will you.

You could call this one the last of the classic Ultimas. It's pretty nice to look at (though you know that Ultima VI will be even more nice to look at). They improved the gameplay a little bit, so that this old interface is pretty good to use - not more toget out of it. Good game, nice story, intense atmosphere - one of the better "old" Ultimas.

The fifth version of the Ultima series, on Amiga the 6th was the last one released. In this episode, many actions were expanded, including much more world interactivity and much deeper characters. 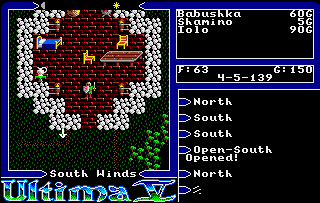