This is the start of the Age of Enlightment trilogy. After Exodus' defeat, there was peace in Sosaria. Lord British, a man from Earth, united the scattered people under his rule. He called this new kingdom Britannia, named after himself.

Now he introduced af system of ethical laws. Thus, the eight virtues that should help the people of Britannia in their everyday life, were created. The eight virtues were based on three principles: Truth, Love and Courage. Lord British built one great castle for each principle and founded eight cities, each for the protection and spreading of one of the eight virtues.

Ultima IV - some refer to it as the first TRUE Ultima. This is the one in which you become the Avatar. You're no longer playing in ancient Sosaria but in Britannia - this is explained by the destruction of Exodus, which has rocked the world and so on - well ;-)... I liked this game very much and would still call it one of the best in the whole series. Very well made is the process in which you have to prove yourself worthy in all of the eight virtues. If you behave against one of them you lose that virtue and have to regain it. Finally you have to get the Codex out of the Stygian Abyss. On your way you'll meet many people that are willing to aid you in your quest. Ask them to join your party - you will need as much help as you can get, coz' there are many monsters ahead, like the Balrons, really dangerous creatures, and some Devils themselves (referred to as lieutenants of the evil).

I remember the time this one came out - it kind of smashed. The atmosphere is intense, just a great game. Though it has become old by now, you should take a look at it if you not already did. This game is really worth it!

It has an improved version of the Ultima engine, with color graphics and better character interaction. But what really makes Ultima IV shine is its radical departure from any other RPG made before or since in terms of the story and goal. 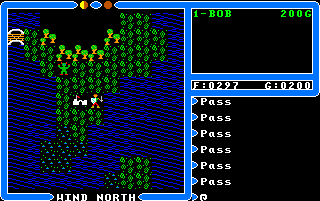 People who downloaded this game have also downloaded:
Ultima 5: Warriors of Destiny, Ultima 3: Exodus, Ultima 6, Secret of Monkey Island, The, Eye of the Beholder