One of my favorites from C64. I used to play with Brutal Deluxe (the team that You lead in this game) all night until I finally won the championship. Huh, it was a hard task, but with right player purchases it was a piece of cake. Brutals will have an easy task in 2nd division, but division 1... It sure is a hard one. Now, what am I talking about? Ok, in Speedball (which is kinda like American football, but rougher) a goal is simple - score a goal, hehehe. But it will not be easy with all the bloodthirsty opponent players. Be careful, Your players may even end up in hospital if You don't take care of them. Anyway, just try to be a champion. Through a league or a knock-out cup system... Your choice.

Have you ever thought about how will football look like after 100 years? The Bitmap Brother had! Speedball is a real futuristic football game, with amazing graphics and speed! 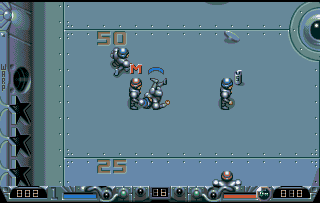