Cannon fodder is, in my opinion, one of the best war games out there. It features a very unique mouse control, which actually works very well for blowing the heads off of your enemy. As the game starts you view all of the recruits lining up outside the military camp, only a few get let through each time. Every time you complete a mission, more of these little soldiers line up. These could be said to be your lives. Each time you fail a mission, this line goes down as you use more of your soldiers. When the soldiers do die, you can see all the graves outside of every single dead soldier. But if your soldier survives the mission, he gains rank every time. There are many ranks to go through, and it is very hard to get someone to the top ranking.

When the action begins you start off in an area where you are surrounded by enemy, and don't worry you can't kill your own troops. (Unless a grenade/Rocket Launcher is used). Usually your men all follow each other around shooting as each other shoots, but if you don't want them to go following each other around you can always get them to split up into up to 4 different groups.

As missions commence, and more and more are completed. The missions become more and more difficult. Soon, you have to destroy buildings and other obstacles. To do this you have to gather grenades. The building is only destroyed after the door comes off of it. From these buildings more enemy soldiers come. These buildings are easy to destroy at first, but as you move on there are more and more difficult things, such as turrets and things. Also, more advanced enemy weapons come onto play such as rocket launchers, and grenades. But usually when they have them you can also pick them up. There are also many different scenes to go through, such as icy and snowy. Or tropical Jungles, or huge marsh lands, and vast deserts. Plenty to keep you occupied, and to keep the game varied. Your troops are equipped to swim in all depths of water, but when they get caught in quicksand they will surely die. They cannot shoot unless they are actually in shallow water though, so be careful not to swim into the enemy camp to far. Also, if your troops get caught in the ice they will likely slip around so it is good not to move to fast on the ice.

All in all, this game is extremely fun and funny. I especially like the credits at the beginning where it shows the developers, and the music is pretty good too.

One of the greatest war games ever created for the Amiga. You can play the war from the funny side. "War has never been so much fun!" A little strategy, a litte action, and a little bit skillfull. Great music with featured voice! 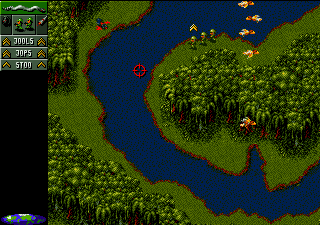