A very unique rugby kind of game. You can choose to play a single game against the computer or another human player, play a full league or a knockout tournament. The goal in each match is to score in the opponents' goal. You do this by throwing a small metal ball onto a metal plate (this is the goal). During the match you can block the opponent players and also push them in order to get the ball or just avoid having them score with the ball.

After each match you can buy different things from the money you collect by picking up these small round things from the field during each match. You can buy everything from extra time (good if you are a goal behind) to more strength for you team players. Additional stamina and power are essentials to get in order to beat the best teams in the game but as you always meet the worst teams first there is a chance to build upa quite good team before you meet the stronger teams.

Overall a great action based sport game offering a mix between rugby and handball and isn't been seen in other games. Both the graphics and sounds are nice looking Speedball offers tons of gameplay because you both a play a full league and also against another human player. The controls are easy but the lack of overview regarding time and score in the matches could have been better but there isn't much to do about this. A great classic game with superb gameplay. 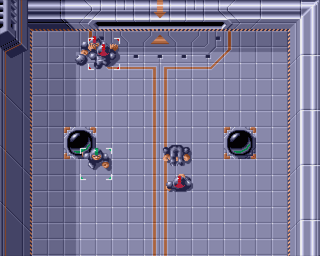