Rick Dangerous is kinda like Indiana Jones caricature. Cute little guy with a funny hat, a gun and some dynamite sticks. His plane crashed and he's on his way back home to London. A true classic that everyone should already know about. Rick was a hit game and for a reason. Download it and see it for Yourself!

You play Rick Dangerous, a guy who's on a quest to find the lost Coolu Amazon tribe. He's a lot like the Indiana Jones. But his plane crashes in the middle of a bunch of crazed Coolus. With his gun in one hand, and dynamite sticks in another, he's up to the challenge of escaping. 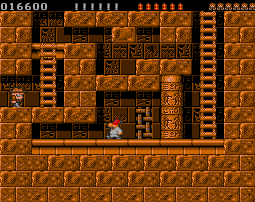