This unique strategy game quietly sank when MicroProse brought it to the U.S., despite garnering considerable following in Europe. This game is similar to Impressions' Air Bucks in that it is a business sim, only here you manage a fleet of zeppelins that were in commercial use in early 20th century. Set routes, choose from various engines, and see the profits roll in. A case of original concept sank by poor interface and repetitive gameplay. For the patient only! 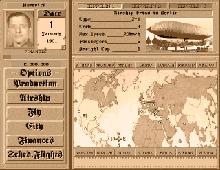