WxSpellcast is a good Windows version of Spellcast, a fun multiplayer-only strategy game for UNIX that is in turn based on Richard Bartle's Spellbinder paper-and-pencil game first published in his magazine. This two-player game casts you as a powerful wizard who must cast spells by making hand gestures - similar to the ones in The Summoning computer RPG game, except here some spells require two-handed gestures. Basically the two wizards take turns to cast spells, and the duel is over when one wizard sustains 15 or more points of damage. Simultaneous death is a posthumous draw. More details from the official rules: "each turn both player's will write down in secret the directions for their wizards and the monsters under their wizards control. After both players have written their directions for this turn, the moves are revealed at the same time and dealt with as if the actions specified therein occur simultaneously. Certain spells may alter these circumstances. For example, you don't get to see all of your opponent's moves if their wizard is invisible. Each turn a player's wizard can either gesture with their hands to weave part of a spell, stab with their knife, or do nothing. They use both hands and each hand can act independently or in concord with the other. Monsters will obey their master's commands exactly. Monster's may change hands (as it were) as a result of enchantment. From that point on the monster's attacks are directed by the new master. Monsters may make a single attack each turn against a target chosen by their master or they may spend the turn doing nothing. Monsters may attack on the turn in which they are summoned. Monsters are untrained, unintelligent creatures and can neither gesture nor cast spells. Players personally acquainted with monsters who wish to vouch for their ability to cast spells are requested to keep quiet. Wizards may also choose to surrender."

Offensive spells include summoning, elemental energy, protection, and psionic influence to name a few. Because your opponent may damage you while you are preparing to cast a complex two-handed spell, this means that timing and planning are crucial to insure that your defensive spells can block all attacks. This Windows version is a very nice port of the UNIX version, and although there is no AI present, the well-designed user interface means you can have a lot of fun fighting a friend on the network. Highly recommended for anyone looking for an elegant two-player war/strategy game. 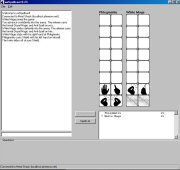