Witches is a unique and wacky chess-like strategy boardgame. Your goal is to move your witches onto the magic pattern on the magic kitchen-floor in order to win the yearly contest for the leadership of the Witches' Guild. The official rules go as follows: "...the game is very simple: you play againts the computer and you have to move your witches to the squares marked with a cross. Each witch can move 1 to 4 squares. This number changes when you move a witch. Only witches on broomsticks (move 4) can fly over other pieces. The others can't so they may get stuck. Watch out for this, because if you can't move, you lose. You can capture your opponents pieces, after which they are moved to their base line.

In the end screen you'll see a 'clap score'. This is based on the number of pieces you capture or lose. This score is really irrelevant because you can't win on score. You can only win by being the first to move all your witches to a marked square."

Witches is easy to learn, features a competent AI (which cheats by default, but you can toggle that off), and each game takes only a few minutes to finish. This makes the game a fun time-waster, especially if you have a few minutes during coffee break to spare. First released as a shareware DOS game in 1998, the windows version is now available as freeware from the author's website, but be warned: it will not work on Windows XP. 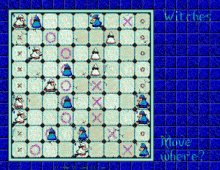