Virtual Plateau is a great freeware PC version of Plateau, a fun and unique board game designed by Jim Albea. The object of this interesting game is to either make a stack of pieces six tall, or capture and hold six enemy pieces. Game Cabinet contains a good description and review of the board game as follows:

"The goal of the game is to either capture a number of your opponent's pieces or collect six of your own pieces into a tower or plateau. Each of the pieces takes its nod from a Chess piece - the Queen, Bishop, Rook or Knight (well, almost the Knight). The twist is that each playing piece may move in two different ways and one of those movement styles is secret until revealed by use! Each piece has two faces. Each face may be colored differently. The player determines which face will be up when the piece is deployed. Before moving, the player has the option to flip the piece so as to use the movement style of the other face.

Movement is based on both the color of face showing (which determines the legal directions of movement) and number of pieces in a stack (which determines the number of squares to be moved, except in the case of the Twister/Knight-like piece, which always moves one square orthogonally followed by one square diagonally in the same basic direction - surprise!). Pieces may be dropped off the bottom of the stack onto empty squares or stacks topped with a friendly piece and friendly pieces may be picked up and added to the bottom of the stack as it moves. Upon arriving at its final destination, the stack may capture a number of opposing pieces equal to the number of pieces in the stack at the time of arrival. Stacks that contain enemy pieces are divided into units by those pieces. Only the top unit on a stack may be moved as is otherwise treated as a stack.

Play takes place on a four by four grid with pieces sitting in the squares. Players begin the game with their pieces off the board and bring their pieces onto the board one at a time. Pieces that are off the board are concealed so that your opponent has no clues as to the identity (ie the hidden face) of the pieces on the board.

Plateau is good fun with lots of surprises and upsets stemming from the hidden abilities of the playing pieces. As in Pente and other such games, the duel goals of capture and set creation keep things rolling along nicely. Neither player will benefit from stalling."

This computer version features many animated diagrams that explain the rules, as well as a computer player - although it unfortunately can challenge only beginners to the game. If you like Chess, Mastermind, or thought-provoking board games in general, Virtual Plateau is a great addition to your collection. 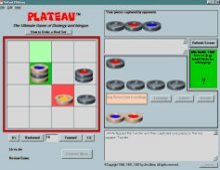