Triple Triad Gold is an excellent fanmade clone of Triple Triad, a popular card game included as an optional mini-game in Squaresoft's Final Fantasy VIII. The game is ideal for FFVIII fans who want to quickly play a game of Triple Triad without wasting time looking for opponents to play against. But it will also appeal to fans of unique, "light" card games that are easy to learn and fun to play.

As in FFVIII, there are many rules in Triple Triad Gold, but they are all based on the same goal: deal 5 battle cards, one at a time, on a 3x3 grid to overturn as many of your opponent's cards as possible (overturning changes the card to your color). When you overturn a card, it becomes yours for the duration of the game. The player with the most number of cards at the end of the game is the winner. The different rules dictate when you can overturn a card. For example, under "Same" rules, when a card is placed adjacent to two or more cards, and the number values on any two sides of the other color are equal, all the cards touching the attacking card that are its opposite color are flipped. Under "Elemental" rules, there will be elemental symbols on the board. If you place a card with an element symbol on a tile that's labeled with the same symbol, the values on all four sides of the card goes up by one. If the element symbol does not match or if there is no symbol at all, the values will decrease by one instead. The variety of rules keep the gameplay of Triple Triad Gold fresh and interesting, and you could combine a number of rules to try out different strategies.

This fanmade remake for Windows offers all the rules from FFVIII game, a very polished look, all the cards with their graphics, and even a nice FFVIII-style card viewer. There are 3 different AI levels, although they do not offer much of a challenge. You can play against a friend in hot-seat mode, and the designer is currently working on a new version that will offer IPX and TCP/IP support. Whether or not you have played FFVIII before, you will enjoy Triple Triad Gold if you have even a passing interest in unique and fun card games. Recommended! 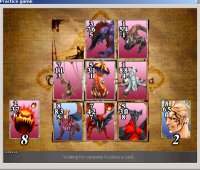