Trimok is an excellent and unique board game based on the well-known Japanese game of ?jan-ken-pon? (scissors-paper-rock) that we all play as kids. The objective is similar to Chess: two players (White and Black) play against each other, each trying to capture all opponent's pieces to win. There are three kinds of pieces: scissors, paper and rock. The capture rules are the same as the actual game: white scissor can capture black paper, white paper can capture black rock, and white rock can capture black scissors. Each player starts the game with four pieces of each type, for a total of 12 pieces in all. The game is over when one captures all of his/her opponent?s pieces, or when either play can no longer move a piece.

The game is easy to learn, and quite fun to play except that with only 12 pieces on a 6x6 board, the game is often over too quickly?even more so than Checkers due to the specialization of game pieces. You can often tell the fate of your game already by mid-game when half or more pieces have been taken by the opponent. But even with this predictability, the game?s unique gameplay and rules make it fun for a while. The computer puts up a decent fight, and there are special rules that liven up the game. Recommended, especially to anyone who likes unique board games. 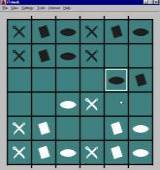