Shogi Variants is a great freeware game for Windows 3.x and up that boasts a wide range of variants of Shogi, a popular Japanese chess game. The official description says it all: "Shogi Variants is a freeware Windows program to play 'Shogi'... or one of 16 other ancient and modern Shogi variants. The variants range from one of the smallest playable chess variants, Micro-Shogi, with a 4x5 square board and 10 pieces, to the world's largest chess game, the gargantuan Tai (Grand) Shogi with a 25x25 square board and 354 pieces! The ancient games comprise some of the most innovative and ambitious variations ever attempted on the chess theme and in some of the enlarged versions, introduce a menagerie of what must be the most powerful and bizarre pieces ever seen in a board game.

The program is for games between 2 human players or for play against a computer opponent, and includes full on-line rules, displaying of all legal moves, protection and threats, and the other features you would expect in a program of this type. Version 1.55a has a computer player for all supported variants except Tenjiku Shogi."

The game places more emphasis on the variants themselves than on introductory elements (such as tutorials, etc.), and therefore is recommended only for intermediate or advanced Shogi players who are already familiar with the game. Each variant comes with a very good summary of rules, as well as its history and a nice diagram of the pieces' allowed movement. The game is also very easy to use. When you click on a piece, you can see all the squares it is allowed to move to. The latest version of the game adds a computer opponent (previously you could only play against another human being) which plays a pretty good game (but then again, as someone who's played Shogi only a few times, I don't know enough to judge ;)) If you already enjoy the actual game, you will likely have a lot of fun with this freeware old game. Otherwise, try Ishi Press' Shogi Master instead for a more beginner-friendly title. 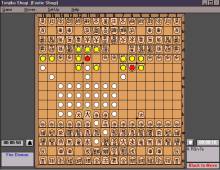