One of the better Thai chess games on the market, this is version 2.2 of Chussana Pun-ngoen's Thai Chess program. For those who are unfamiliar with Thai chess (and that's most of you ), here's a summary of the differences between Thai chess and classical chess: first, the pawn moves almost the same as a pawn, except that it starts on the third rank, not the second, and therefore cannot move two squares forward on the first move. The major differences are that the bishop in Thai Chess moves like a silver general in shogi (which is Japanese chess). This means that the bishop moves exactly one square diagonally or one square forward, but cannot move one square directly backward or sideways. The queen in Thai Chess moves exactly one square diagonally only. The pawn in Thai chess promotes to a queen on reaching the sixth rank (not the eighth rank). However, remember that in Thai Chess the queen is a weak piece. As a result, promotions are much more common and a player frequently has several queens on the board in Thai chess.

The pieces are set up the same as in International chess, except that the pawns start on the third rank and the king and queen on the white side are reversed, so that a king faces his opponent's enemy queen. This means that the two queens, which move diagonally only, can eventually capture each other. The rules of checkmate are the same. However, the Thai equivalent of the fifty move draw rule is much more complex. In Thai Chess, the player with the stronger side is given points for each piece he has left on the board and, the more points he has, the quicker he must mate to avoid a draw. For example, in the endgame of king and two rooks against a lone king, the player with the two rooks must mate in just four moves. However, if the lone king is near the center of the board or attacking an undefended rook, there are positions in which it is impossible to mate in four. Thus, if a situation arises in which there is a king and two rooks against a king and only one rook, the player with only one rook may be able to force a draw by sacrificing his lone remaining rook.

Overall, while chess players will be able to pick up Thai chess quite easily, there are enough rule differences to require a different strategy to succeed. I like to think that you must be more aggressive and risk-taking in Thai chess (e.g. willing to sacrifice pieces) to succeed, but what do I know-- I'm just a chess rookie ;) Anyway, I hope this program, which is one of the best computerized version of Thai chess I've ever seen, will spark some interest in the electic version of chess played in my homeland :) Recommended! 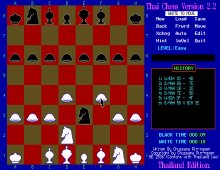