TrianGO is a solid computer version of the relatively unknown variation of Go, a popular Japanese boardgame. This excellent multiplayer game is played on a Chinese Checkers-style board. Each player has 14 "stones" and takes turns placing them down one at a time. The object of the game is to surround your opponent's stones with a triangle of three of your stones, in which case you can then choose to capture your opponent's stones on your next turn (if your stones are still on the board that is ). When you do a "capture," your three stones that did the capture are also removed from the board, but they can be reused. To win, you must capture all other stones or be the last person that can make a move. This might sound easy, but with 3-4 players (I've only played a 3 player game) it's hell...but a lot of fun. You can also play solo against the computer: it has 5 setting from "Novice" to "Grand Master." One thing I really like is that it shades areas that you control (in a triangle) in your color...with several players this makes things very colorful and interesting, overlaps create more colors. You can also turn other peoples' shades off to see the board more clearly. TrianGO is definitely a must-have for all puzzle fans, especially those looking for a good multiplayer game or anyone interested in Oriental boardgames. Highly recommended! 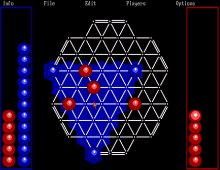