Transsib is a great Java version of TransAmerica, a fun "beer & pretzel" tile-laying tabletop strategy game from Rio Grande. A game for 2-6 players, the goal in this game is to accumulate the most points at the end of the game. During each turn, you must lay at least one track and can build up to two. The tracks must start from your train's starting location, and must always connect to your existing network on subsequent turns. An unoccupied double line (river or mountain) costs two tracks. If you connect your track to another player's network, you can use that network as if it were your own. Once a player connects 5 cities, that signals the end of a 'turn' and score-keeping is done. Other players get negative points for "open track," i.e. tracks that are not connected to a city. Then their trains are moved back according to the number of missing tracks. Then, all tracks are removed, the city cards re-shuffled, and another round begins. The game ends when a player crosses a 'barrier,' and the final tally is counted.

Unlike the board game, you can play many different maps in Transsib. The game lets you compete against tough computer players (with varying difficulty levels), or with friends on the same computer or over a network. A clean user interface and rule variants round off this well-coded Java game. A fun way to spend 20-30 minutes without setting up the actual board game. 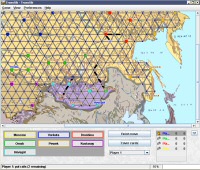