Linel's Traders is an ambitious clone of Dani Bunten's classic M.U.L.E. that unfortunately adds too many new gameplay elements with the subpar AI that the elegant simplicity of M.U.L.E. is lost. It is no wonder, then, that the game was only mildly successful in Germany, and the English version (here on this site) published by Merit Studios was virtually unknown.

The game looks and plays like M.U.L.E. with a VGA facelift except for a few options which M.U.L.E. fans will be quick to learn. For those who are not familiar with M.U.L.E., it is essentially a galactic trading game for 1-4 players, up to 3 of which can be computer-controlled. Players first choose a species to control, each with its own look, and some have special handicaps. The players are then allotted money and supplies. Each ensuing round of play includes a land grant, during which the players vie for plots of real estate on the planet's surface. During each turn, the player may choose to produce energy or food, or to mine a plot of owned land. After you have paid for and obtained a rocket (replacing a mule in the original classic), you send it out to drop the production symbol onto the plot. It is that simple -- you are literally in business. Random events, like planetquakes, acid rain, and pest attacks, occur throughout the game. At the end of each round, there is a production sequence where all the players watch to see how their little colony is doing. After that comes the game's most fun event: the market phase. Here, you can see your surplus in any commodity, and buy what you lack from the store or other players. For each commodity in every round there is an auction. Each player can declare as either buyer or seller, and march their characters up and down the screen, setting sellers' and buyers' prices. Trading takes place when a seller's line meets a buyer's (supply meets demand, as it were). Because there is a time limit, trading is usually frenzied and cutthroat. Here is where Traders truly preserves all the fun that was in M.U.L.E. auction sequences.

Unfortunately, the AI in Traders is lacking. It is all too easy to spot a pattern in the computer players' moves, and corner the market in the commodity of your choice. The game also adds many commodities and building types, most of which add no extra play value, and simply become extra information you have to keep track off. M.U.L.E. fans, once the "wow" effect of seeing VGA graphics wears off, are likely to find Traders a much too easy M.U.L.E. clone. Definitely a game that is worth a look for all business sim fans, but comes nowhere near the addictiveness of the original. For a truly excellent clone, play Subtrade: Return to Irata instead.

Remember M.U.L.E? The legendary game from ZX Spectrum and C64? You do! Great! Here comes a game inspired by the good old classic, but with some new, maybe even better features!

Traders is a galactic trading game for up to four players. Each player is given a fixed amount of money and dropped onto an unsettled planet along with the others. The players then set up the base and the production (and trade!) can begin! The game is played in round during which the players can construct new facilities for production (energy, food...), mines, rockets... At the end of each round there is a production sequence where you can see how good your colony is functioning. After that players go to the trading scene where all the fun starts. This is where each player sees its goods as well as what everyone needs, then simply trade! For each commodity in every round there is an auction. Each player can declare as either buyer or seller. Trading takes place when a seller's line meets a buyer's. All this may look a bit confusing at the beginning but once you learn all the tricks you will deal with everything with ease.

The only downside in the game is a low AI. Once you learn how to trick the computer players you will win each game. That's why you should play Traders with your friends and make it much more challenging! 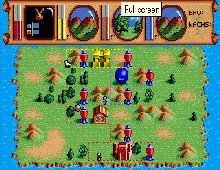 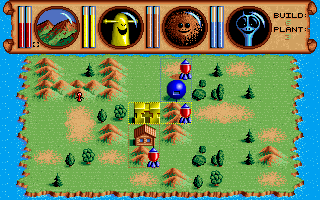