One of the best M.U.L.E. clones ever made, Subtrade: Return to Irata transfers the galactic capitalism of Dani Bunten's timeless classic to an undersea economy. Despite new species, background graphics, and different commodities, gameplay is still M.U.L.E. at its heart: up to four players vie in a cutthroat competition to be the richest businessman in a futuristic economy. The different phases of M.U.L.E., e.g. land grant, production, and marketing, are preserved intact and are greatly enhanced by intuitive mouse-based interface and VGA graphics. The auction interface, which is the best part of M.U.L.E., is still as furious and fun as ever, with computer players that are aggressive enough to pose a real challenge. Unlike Linel's Traders, another M.U.L.E. clone, Subtrade does not introduce new gameplay options or the number of commodities. While this means that M.U.L.E. fans will have seen it all before, the game's faithfulness to the original also means that the elegant simplicity of M.U.L.E. is well preserved. The computer AI also seems to be better than the original classic, since I found it much more difficult to corner a market, and computer players respond quickly and aggressively to price-cutting.

Overall, Subtrade is definitely one of the best M.U.L.E. clones, if not THE best. M.U.L.E. fans will definitely enjoy this one, although the disappointing lack of tournament mode means that an average game with 4 players can be finished in less than 1-2 hours. 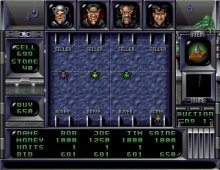