TigrisGame is an excellent fanmade computer adaptation of Euphrates & Tigris, Reiner Knizia's classic board game that ranks among one of the best games of its kind ever made.

If you have never played the board game before but love Sid Meier's Civilization (and who doesn't?) or Avalon Hill's Advanced Civilization, you are in for a pleasant surprise. Set in the ancient world and designed for 2-4 players, the object of the game is to earn victory points in four important areas: religion, people, trade, and farming. How well you do in each area is crucial because your final score at the end of the game is the area in which you did the poorest. So for example, if you managed to get 15 in 3 areas but only 5 in your last area, then your is only five. Player with the best lowest score wins the game. This clever mechanic gives everyone a strong incentive to focus on all four areas, and therefore makes the game much more exciting and intense than most other games.

Like all other games from Knizia, Euphrates & Tigris is very easy to learn, but offers virtually unlimited gameplay variety. During your turn, you can perform two actions, which must consist of either: placing a tile on the board, placing/removing/repositioning a leader on the board, placing a catastrophe tile on the board, or discarding and replacing up to 6 tiles from your hand. In order to score victory points in the various colours you must have leaders on the board. Leaders must be placed adjacent to temple tiles. Once a leader is placed on the map, a kingdom has formed (this is defined as a group of adjacent tiles with one or more leaders present). The game ends at the end of a turn during which a player was unable to refresh his hand of tiles to six, or if the number of treasures on the board was reduced to one or two. Treasures held by players at the end of a game count as "wild" victory points that can be assigned to any color. This concept of hidden victory points adds a wonderful element of doubt and uncertainty into the game, so your strategy will not only depend on your strategic prowess, but also your capacity for risk.

True to the board game, TigrisGame sports an intuitive interface, faithful rendition of the rules, and some challenging computer players. The game certainly brings a board game classic to computer gamers who may not have been exposed to this form of gaming before. If you like Civilization-style game, TigrisGame is a must-play. The game is coded in Java, so you will need Java Runtime Library to run it. 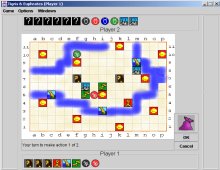