Ten Nights of Killing and Mayhem at F.J.B.

One of the most unique strategy games you'll ever play, Ten Nights of Killing and Mayhem at F.J.B. is a turn-based squad-level game similar to X-COM, but with many unique twists. The plot: in order to stop the demonic Principal of a local highschool from effecting her plans for world domination, you must control up to seven students who enter the school and take on the evil teachers. Designer Jeff Sinasac's thoughts on his game say it all about the good and bad of this rare old game:

The thing I love most about this game is that it is so unique. I know of no other game that has a plot even remotely similar.

Although the artificial intelligence is fairly simple, the enemies do seem to pop out and surround characters at the most inconvenient of times. Simple A.I., but effective A.I. The teachers are so varied in their abilities that games never play the same twice. The mechanics work smoothly, and the game is no pushover. It can be beaten, but only by someone who's willing to think. The game itself, the premise, the documentation, the online docs - everything is wrapped in a lot of humour. What other game actually features "Bull Shit" as a Character statistic? And yet it still has a touch of horror to keep it serious.

The game is based around a progression of 10 nights (hence the title). The early nights, unless you are extremely stupid or impatient, present no real threat to the player, but take the longest to play (because the characters are so poorly armed). The real fun of it kicks in, for me, around the 3rd or 4th night. But from that point on, I think the game really grooves.

Until a player becomes familiar with the layout of the school, he'll have to spend a lot of time referencing the maps that come with the game. That can slow things down. [And] because there is no way to track a teacher that you've lost a line of sight to, sometimes it can be a painful process tracking down the single teacher left alive at the end of a night. "

Once you overlook the amateurish graphics (and the truly ugly skeletal hand that acts as mouse pointer), you'll find Ten Nights a thoroughly funny, unique, and challenging strategy game. The AI of your units can use some work, but the humor and well-executed "campy" atmosphere make up for all the shortcomings. Play it-- and you may well be surprised as I was about how fun the game is. Big thanks to designer Jeff Sinasac for releasing the game as freeware and sending me the game. 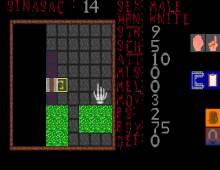 Ten Nights of Killing and Mayhem at F.J.B. screenshot