The Sting! (Der Clou 2 in Germany) is a little-known sequel to The Clue!, one of the most unique and compelling adventure/strategy games of all time. The game took the best things about The Clue! and enhance them with 3D graphics, more options, and the same sense of humor. The game returns you to the role of Matt Tucker, lifelong career criminal. This time, Matt has recently been released from prison and is eager to resume his life as a burglar. Your objective is the same as in The Clue!: assemble a gang of accomplices, select the appropriate tools of the trade, and then plan the heist each step of the way.

The gameplay is split into three distinctive parts, all of which are designed in such a way that make The Sting! feel more like a "burglary sim" than the first title which uses an adventure-game style menu interface. Before each heist, you will walk around the nicely detailed 3D city, buying tools from shops and recruiting accomplices (usually by meeting them in bars). Starting out with only 15 dollars, you will have only a crowbar and fireaxe at your disposal, but each successful heist will bring in more money - and a rapid expansion of your toolkit to encompass more "professional" tools such as lock picks, soldering iron (used to disable alarms), and drill (used to open safes). You can also sell your loot at a sleazy pawnshop and buy faster getaway cars.

The second part of the game is in my opinion the most fun: making a heist plan. Here is when you see the layout of the building and the guards' movements, and determine where your gang members will go and what they do. This provides an excellent way to test your plan, since you don't actually put a plan into action until you click on the 'Start plan' option in your flat - a sort of "save option" so to speak. The final part of the game is the actual heist, which is where things could go wrong even though you think your plan is perfect: guards may notice that the door was forced open, or your gang members may take longer than you thought. A nice touch is that your gang members gain skill through experience, so the more heists they pull, the faster and better they will be.

Despite the problem of camera angles obscuring the action sometimes, The Sting! retains the same thrill as its predecessor: the satisfaction of seeing your gang members sneak past unsuspecting guards, grabbing loot, and getting away with it. There is also often a lot of extra loot in each location, so you have the incentive to go back and replay the levels. If you enjoy The Clue!, you will definitely like this little-known sequel. Compared to the first game, The Sting! is more linear than the first game and much more strategy-oriented, so anyone who likes the complete freedom of movement and adventure-style interface in The Clue! may be disappointed. Unique premise and fun gameplay (even with the sometimes-awkward camera angles) make it well worth your time, though. Highly recommended! 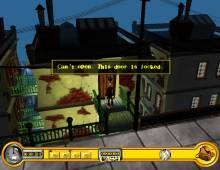