Seven Years War is a decent WarCraft II clone - that is, a real-time strategy game - based on the "Seven Years War," the period between 1592 and 1598 A.D. during which Japanese shogun Toyotomi Hideyoshi invaded Korea twice as part of his audacious plan to conquer China and divide it among feudal lords. Hideyoshi waged an extremely brutal war that by some accounts killed more than one million Koreans - more than one third of Korea's total population at the time.

Except for Oriental motif of units and buildings, Seven Years War looks almost identical to WarCraft II - down to the interface layout and blue-vs-red gameplay. Upon closer inspection, though, you'll notice some interesting differences. For instance, the gameplay mechanics has been simplified: you only need to worry about accumulating food to build buildings and units - unlike multiple resources e.g. wood, gold, etc. of WarCraft II. A neat feature, though, is the existence of realistic weather effects in the game, including night/day cycle and seasons. When day turns into night, your visibility will naturally be limited. Your crops need rain to grow, and so you must plan carefully before summer, when draught is more likely to occur.

Seven Years War includes 2 campaigns: Japan's invasion of the Korean peninsula, and Korea's resistance against the invaders. Each campaign includes only 10 missions, which means it won't take you weeks to finish it. You can play a random map against another player via the Internet, though, which helps increase the replay value quite a bit.

Overall, Seven Years War doesn't offer any compelling innovations (such as, say, Seven Kingdoms) to set it apart from WarCraft II clones. However, if you're looking for a decent RTS that is accessible and not overly complex, or a RTS set in the Orient, Seven Years War is well worth a look. 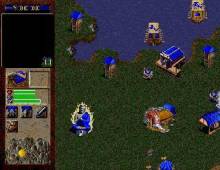