RealmSpeak is a solid freeware Java version of Magic Realm, Avalon Hill's classic and long out-of-print tabletop strategy game featuring fantasy elements. An ambitious game that is much broader in scope and more complex than other similar games (such as AH's own Wizards), Magic Realm successfully captures the feel of a "dungeonmaster-less" tabletop RPG game. This review explains why:

"The different characters that the players can use are very different -- they don't simply have different "stats." The Swordsman, Amazon and Black Knight, for example, are all warriors, as are the Berserker, Dwarf and Captain, but they all behave quite differently both in combat and in dealing with others. More important, though, are the game's monsters and non-player characters, who appear and disappear from different parts of the board with an intriguing "semi-predictability." If I hang out at the Inn, the group known as the Company -- my allies, if I'm the Black Knight -- is sure to show up eventually. But, will the Rogues attack me first? How long can I linger near the altar, searching for the treasure that I'm sure is there, before the demon appears to make me into his dinner? I know that smoke means dragons, but if I hide, maybe they'll go away ...

The thing about Magic Realm that immediately gets attention is the board. The tiles are set up by the players, and can be arranged to yield a board that is brutal, friendly, or anywhere in between. Civilization can be clearly defined on one side with the "wilderness" on the other, or the world might be a nasty series of "outposts" with the dangerous unknown all around. Twenty hexagonal geomorphic tiles can yield who-knows-how-many combinations. Just two such tiles would give you 36, including rotations.

Magic Realm is much more complex than most fantasy board games. That's not good in and of itself, but this complexity has been used to give the game depth. By using a lot of rules, Magic Realm is able to contain more of the elements of role-playing games than most other board games. The players can hire non-player characters and send them off to do things. Certain non-player groups want some items more than others, and every player has his friends and enemies, not including each other. There are wars waiting to be started that can lead to violent, board-wide conflict. Any player can have agents and spies roaming the countryside, and powerful relics the others would kill to get. The players might work together, or they might start to but then "get ugly." Or, they may declare each other enemies from the outset.

There are many ways to win Magic Realm , because the players must choose their own victory conditions at the start of the game. You don't just need to have "the most gold" or to get to a certain spot. The game can be played "zen," where the players continually extend the game and use the victory conditions as personal goals, or with as much vicious competitiveness as any tournament game."

Coded in Java, RealmSpeak brings Magic Realm to life with superb scans from the original cards and board, solid implementation of most rules (as of version 0.9), and an intuitive multiplayer-setup interface that lets you play against up to 16 other players. You can also play the game solo - by hosting the game yourself and controlling all the characters. Highly recommended to fans of the board game, or anyone looking for a complex fantasy board game. 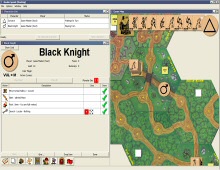