One of the earliest real-time space combat / trading / strategy game was well ahead of its time for its blend of trading and combat that preceded EA's classic Starflight by a few years. A hit on Commodore 64, it was largely unknown to the nascent PC gaming world. Even with its limited 4-color CGA palette, the game's graphics are superb, and the action gets very intense at times. The aliens are even more colorful and varied than Starflight, and some space combat sequences approach the intensity of Star Control despite non-intuitive controls. Remember: buy low, sell high :) 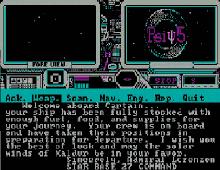 People who downloaded this game have also downloaded:
Reach for The Stars, Pacific General, Rules of Engagement 2, People's General (a.k.a. Dynasty General), Proliferation