Proliferation is a great game of nuclear conflict set in the near future. The premise: "[nuclear capability worldwide] has escalated, and many smaller states now possess tactical nuclear missiles. The state of affairs has polarized the world, and the major powers have mobilized forces in an attempt to enforce security by force. As one of the major powers, you have a number of resources at your disposal, including conventional armies and fleets, diplomats, tactical nukes and ICBMs, and defense satellites. In addition to the military aspects of the game, you also have to manage economic factors. There is a market of food and oil, each of which is vital to the growth of your population and the management of your military forces."

Although Proliferation looks like an enhanced version of Risk at first glance, it is a deeper game that requires a more intricate balance between economic and military policies. Although you can send armies to occupy other countries as in Risk, it's the nukes that will determine the outcome of war. There are 2 broad kinds of nukes you can use in the game: tactical nukes and Intercontinental Missiles (ICBMs). Naturally, ICBMs are much more powerful but costs money and one whole turn to launch, and they can be shot down by defense satellites. As in the real world, defensive systems cost much more than the nukes themselves.

The game strikes a good balance between military and economics. Each region in the world starts with a given number of population, which grows over time. The more population you have, the more you can build on each turn. To grow the population and move armies or launch nukes, you need sufficient food and oil - both of which is produced in each region but can also be bought and sold on the world market.

The ingenuity of Proliferation is that the game isn't just about the nuclear conflict - it is also about the consequences. While you merrily launch nukes at other countries, you will have to watch the radiation level, both at your country's level and the planetwide level. Tactical nukes radiate local radiation, while ICBMs directly increases platnetwide radiation. At the end of each turn, a certain degree of local radiation seeps into the Earth's atmosphere. Needless to say, radiation level plays a huge part in not only the war but also the fate of human race. Small victories on the battlefield may be a big misstep in the larger context of global warming. You are therefore forced to consider the consequences of your action, and have the "big picture" view of the war at all times. If you enjoy a thought-provoking strategy game about nuclear conflict, a game that offers a decent AI and well-designed interlocking gameplay mechanics, Proliferation is well worth your time. Formerly shareware, the author has since released the game into the public domain, so there is no excuse not to try this intriguing old game. 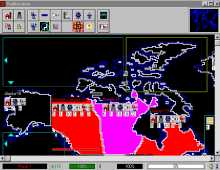