Pirates of The Barbary Coast

Pirates of the Barbary Coast is an ambitious but flawed strategy/action game set in the Barbary Coast region, during the high piracy era of the 17th century. One of the (few) best things about the game is the plot, which casts you as a captain whose daughter has been kidnapped by Bloodthroat (how fitting) the Pirate. He demands a ransom of 50,000 gold, and gives you 30 days before he sells her to the harems of the coast. Your job, of course, is to raise that much money and rescue your daughter.

Gameplay is primitive, and not all that much fun. You raise money by trading goods in various ports-- that's about all the strategy there is in the game. The action part comes in where you decide to fight a pirate ship (you can run from them as well). If you manage to sink the ship, you can board it and seize the captain's log and booty. The pirates' captain logs contain information about which types of goods can be bought cheaply, but they can be out of date. They can also give clues to Bloodthroat's hideout, but this is a rare event. The game's interface curiously resembles a text adventure in many places, such as the fact that you must click on items *in order* (e.g. powder, cannon, push rod) in order to load a cannon successfully. Following this historically accurate procedure is fun for the first time, but becomes a nuisance for the umpteenth time that you're frantically fighting the pirate ship. You must also keep your crew fed, although they replenish the food a bit too quickly for my taste.

Overall, PoBBC will not knock anyone's socks off, or distract people away from Sid Meier's Pirates!, but it does offer some nice touches, as well as ease of play. Recommended for anyone looking for a real oldie on the subject matter that pioneers this niche premise. 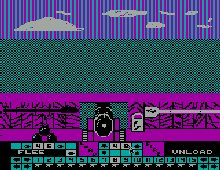 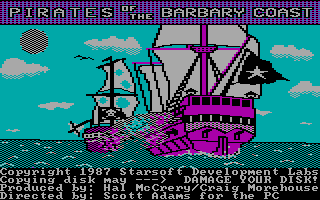 Pirates of The Barbary Coast screenshots