Although Patton Strikes Back is unarguably the worst game of Crawford's career, it was a novel (and noble) attempt to attract non-wargamers to the fray through simplified combat, colorful animations, and excellent help functions and database. A commendable effort that would not be taken up again until SSI's phenomenal Panzer General. 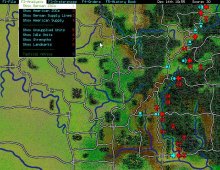