Essentially Romance of The Three Kingdoms with Japan as a backdrop, the game chronicles the achievements of Oda Nobunaga, a shrewd daimyo who came close to the ultimate title of shogun in one of the most properous and tumultous periods in Japanese history. Play as Nobunaga himself or one of his rivals for a greater challenge (because they have inferior starting statistics). This is not as difficult as RTK games because there are fewer territories to conquer, but still very engrossing due to its emphasis on RPG-style character traits and "realistic" personnel management (e.g. you can entice the enemies' generals to defect with gifts, recruit free warriors, search for new talent, etc). Definitely a must play for any KOEI fan and an interesting historical wargame for anyone interested in Japanese history, or how crucial your generals' loyalty is in the thick of war. 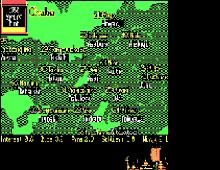