Step back to 1813 and try to penetrate the Russian front. The graphics are reminescent of SSI's Sons of Liberty, but the gameplay is similar to an RTS game, with the exception of a hex system. You can set the timer for actions to take place and they happen automatically (set to 1 second for PURE fun). Keys are kind of funky, but the gameplay is good, especially for Napoleonic era wargame fans. 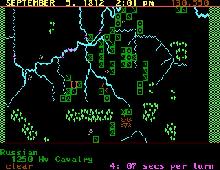