The first MicroLink game, ML Yaht remains to this day one of the best computerized versions of Yahtzee dice game ever made. As in the actual Milton Bradley game, players (up to 6 can compete in this game, any of which can be computer-controlled) roll five dice trying to get certain combinations for their scorecard. Players may reroll any of the five dice twice after the first roll. (They may also choose to stop rolling at any point before that.) Deciding where to put a score can be just as important as actually rolling a certain combination. If you roll particularly well, you can get bonus points.

The combination of luck and strategy that characterize the board game is intact in ML Yaht. The game even supports mouse - a rarity in 1987! If you like dice games, ML Yaht is a must-play. 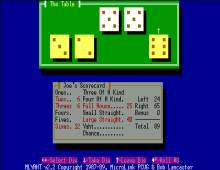